After announcing earlier this year that several unscripted dating shows would be returning for new seasons, a teaser for Love Is Blind Season 3 was released. After making Netflix’s global top 10 list for English-language TV shows for five consecutive weeks and reaching the top 10 in 54 countries, a new season was expected and watched with great enthusiasm.

The goal of this 10 part series is to find out whether looks, race or age matter or whether love is really blind. Singles in Dallas, who want to be loved for who they are rather than their looks, have signed up to date in a less traditional way. They hope to meet the person they want to spend the rest of their lives with, even if they have never seen them.

With nothing to distract them from the outside world, singles talk to a steady stream of potential love interests. When they find someone they really like, they propose and then see their future life partner for the first time.

As a couple gets engaged and goes back to the real world, they will quickly find out if they can turn their emotional connection into a physical one before marriage.

The new teaser doesn’t actually show the faces of the contestants, but we can be sure that the same drama will happen again this season. The video is 31 seconds long and a man approaches the camera and waits for his future wife to arrive soon. While another woman says, “It’s not boyfriend season anymore,”

Even though they’ve seen breakup after breakup and a lot of crazy drama last season, the contestants are still hopeful and say “we’re here to take a chance at love.” As we watch the show, we can see that maybe someone has found their match and got engaged. 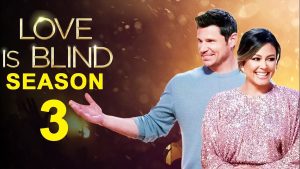 Catch a glimpse of Season 3 of Love Is Blind below.

The third season of the reality dating show Love Is Blind is set to hit Netflix on October 19, 2022.

Have you seen any other seasons of the show? Are you excited to see the entire season in one day? Leave a comment below to tell us what you think.

Who is in the Cast of Love Is Blind Season 3?

Netflix has yet to announce the names of the new cast. But when Netflix site Tudum asked series creator Chris Collen what he’d like to see with the new cast, he said:

We’ll let you know the new cast as soon as we find out who they are.

Who is the host of Love is Blind Season 3?

Nick and Vanessa Lachey, who are married, are back to host Love Is Blind. Nick is the lead singer of the boy band 98 Degrees for a long time. He has also guest starred on TV shows such as “Charmed” and “Hawaii Five-0”. Vanessa plays Jane Tennant in the TV show NCIS: Hawaii. She has also appeared in shows like Call Me Cat and American Housewife.

Is there a trailer for Love Is Blind Season 3?

Even though the official trailer of Love Is Blind Season 3 is not out, Netflix has released a teaser. The show seems to have moved from gold wine glasses to gold shot glasses.

How to watch Love is Blind Season 3?

Love Is Blind is a show created by Netflix. If you want to watch new episodes, you’ll need to sign up for the streaming giant. Right now, those who want to join Netflix have a few options and prices to choose from.