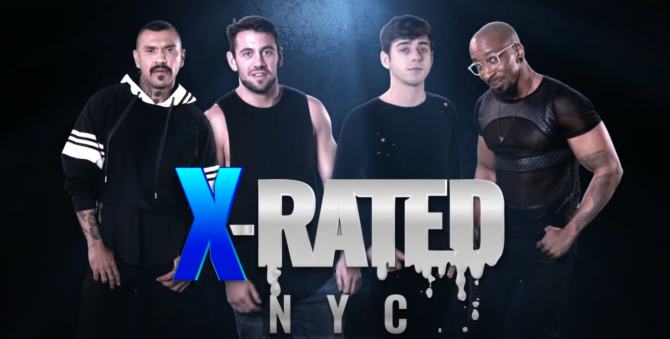 Reality shows are a dime a dozen. Seriously, name a career, and we can almost guarantee that there’s a documentary crew following a group of people around the area as they go about their day-to-day jobs and all the messy drama in it. .

So it’s even more surprising that we’re only getting a show about gay men who work in the adult film industry right now. We’re already seeing these guys all the time—what took so long?

enter X-Rated: NYC, a series that is said to provide “an inside look at the lives of iconic adult actors” as they pursue their dreams in the Big Apple. You think you’ve seen every side of these people? Well think again.

OutTV Originals focuses on four of the most successful names in the industry, with faces you almost certainly identify with: Boomer Banks, Dante Cole, Joey Mills and Max Conor. In X-ratedEach of these hardworking stars shows us what happens when the camera isn’t rolling on set, giving viewers an unprecedented look at what it takes to make it big.

The series is at its best when it brings its cast together—not just as coworkers, but as gay men—creating an unprecedented platform for nuanced conversations about the good and bad of the adult film industry. does. Nothing is off the table for these four, as they share their experiences with hookup apps, safe spaces, gays for pay actors, and more.

RELATED: How my story about disabled adult movie stars turned into one about material warnings and misinformation

“Watch the show because it was created by a group of queer sex workers,” says Tofer Kusumano, whose daddyTV produces X-rated, “People say they want to support queer projects and marginalized groups, but they are more likely to watch a reality show that not only has mostly cisgender straight actors, but cis straight people as well. .. I think sometimes it’s important to step up and support community-led art.”

X-Rated: NYC 19, but its six-episode first season still offers plenty of laughs, drama, romance, and other surprises. Watch the trailer below and then visit OutTV for more details.